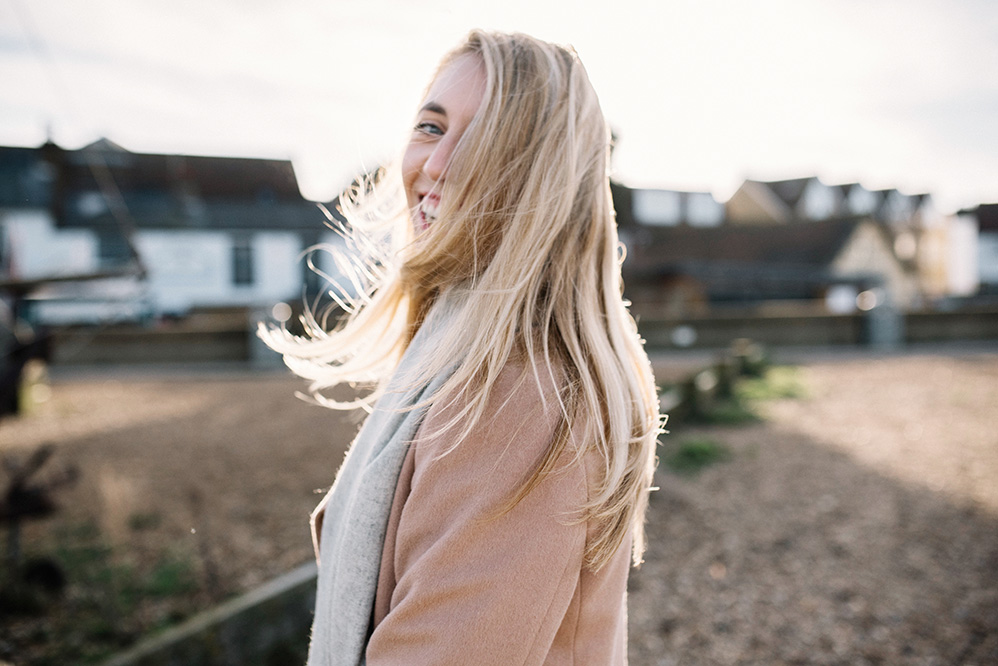 I’m not sure where to begin to write to you about what February brings. In the only way I know how I hope you can see how it’s shaped up in the photographs below. All of which I notice now as I proof read this post – have everyone smiling.

February has felt like August for the most part in the sense that it really has been chock-a-block with not only work but some personal big occasions too. It’s brought Billy, Elliot and I our first home. It’s brought in the first wedding of the year that felt like a spring day with the gorgeous Amy and Sam at Buxted Park,  a successful wedding fair that I organised with my good friend Tara Deighton and all of the shoots in-between.  It’s been a long, wet and cold winter but Spring is around the corner and these fleeting days of sunshine are a gentle reminder that soon we can warm up and hang our big winter coats up for a good while.

Hastings: Romy and Nik had to postpone their original Engagement shoot date, so when they found out that the date for completion on their new house conflicted with the new date they decided not to postpone again, but to have some photographs taken at their new home on the day they got the keys.  I think back so fondly of this shoot: of how when I arrived, Nik was running past me as their boiler wasn’t working so she was off to ask an engineer working on the street outside if he could help – and he did!  Of how they would have offered me something to drink but they hadn’t moved their boxes in yet so they didn’t have enough cups. And also of how they had to awkwardly wave at their new neighbours because I had asked them to stand by the window for the best light.  Lately, I’ve seen lots of shoots that are being blogged for couples who have kitted their house out to Pinterest standards but I feel like this shoot was utterly sincere and unrehearsed and it’s that reason which made it all the more special. It was the before of the Pinterest shoot – the start of their journey. Romy and Nik have really sacrificed a lot to be at this point so to document the day they picked up their keys and to also have the chance to photograph their wedding in early April is the biggest honour.

Whitstable: The last time I travelled to Whitstable was when I photographed a wedding there just over four years ago so it was great to head back there for a pre-wedding shoot. The days are getting longer now so to make the most of the light we started shooting at 8.30am. Leaving Hastings at 6.30am, the drive was beautiful with the sun was low on the horizon. I quickly realised that really, I should have made the shoot for 7.30am. If you want the best light then you simply must sacrifice your sleep. I met with Sara and Gordon who have booked me for their wedding in the South West of France this September. They took to having their photographs like ducks to water and this is mostly because they were relaxed and enjoyed the shoot. It’s always difficult to know what to expect from an Engagement shoot but they took it in their stride and we quickly took the shots we needed with the beautiful winter sun. We finished up with a coffee and a chat at Samphire on the high street. I’m going to make the most of their lovely destination wedding and drive with my partner Billy through France to their wedding in September. Without doubt it’s going to be a stunning wedding and a lovely way to end the extra busy part of the summer season.

Snow: I try not to post/speak too much about my son, Elliot. He’s getting older and he already says, ‘don’t put it on Facebook!’ with a stern look on his face.  I do occasionally get the all clear to post now and then and wanted to share a photo with you.  Elliot is eight now and he still has that look of pure joy when he sees snow outside which makes my heart sing. He remembers when it snowed when he was three years old and without fail will always ask me if I remember when he “threw a snowball at my bag that had a chocolate bar in it.” I do fondly remember those moments and – no surprises on the chocolate bar – I love chocolate! I think he is the bees-knees and he is the bees-knees with bells-on when it snows outside and he has that Christmas-morning kind of excitement.

Buxted Park: When Amy and Sam asked me to recommend them a videographer I mentioned a few along with Dale Rook. Dale works with his partner Grace assisting for the day and I can honestly say it felt like making new friends. Let me tell you that it takes one to know one in the industry and Dale is one determined, focused and creative videographer. It was clear immediately that he cared about what he was shooting and how to create the story – he took items out of situ in order to create a lovely moving image, he knew how to use light and he knows how to direct without pressure. If he wasn’t talking about videography he was talking about the meaning, sentiment and the emotion of his work, or how he plans to improve what he does. When we met on the day, he had already done a recci of Buxted Park and he is probably going to go back to get other details for the story. He was passionate about the shoot, the story and the people and he wants to create beautiful films with meaning. This is exactly what stops any individual from becoming jaded in any given work situation and that is solely down to striving for passion and enjoyment from your work. If I wasn’t so impressed I wouldn’t write a whole paragraph on Dale but I wholeheartedly recommend him if you are considering videography on your wedding day.

It’s nearly four years with Billy now. He brings me great clarity, joy and happiness and he is a great anchor for my creative, emotional ways. If it wasn’t for all of his hard work and saving for years then we wouldn’t have had the chance to have bought our house so soon. I consider myself so lucky to have him by my side.

If you’ve seen the film Blade Runner 2049 you’ll know what I mean when I say I was inspired by the orange.  The day after watching it I kept thinking about the colours in the film and looked to the window. On another dark grey day utilising any light I could, I pulled out an orange backdrop and set up a shot.   Never mind the creases – I quite like them.

A little side note on the film Blade Runner 2049 is that I found the sound to be compelling and I don’t simply mean the soundtrack. I was intrigued as to how this caught my attention when the cinematography and set design were simply incredible in their own right. I looked up the soundscape and found a great article on the ‘secrets behind the sound‘. I picked up these key words that are  totally and completely on my wavelength: ‘brooding tone‘, ‘atmosphere‘, ‘mood‘, and ‘feeling.’ …and the penny dropped. Of course I would like it. Here’s an excerpt:

I began making very brooding musical textures that would underpin almost every scene. So if you listen in any given scene, even if its a talkie in a room, there are these languid kind of pads and tones that are reminiscent of things that Vangelis had done in the first film that you didn’t know were his score, and they weren’t really score they were his kind of sonic noodlings. So I created these sonic noodlings that were made from musical textures — things like wind chimes and guitars, winds, saxophones. But you wont know them as those sounds when you hear the film. But you’ll get this sense that there’s a brooding tone that creates an atmosphere, a mood . . . and you don’t know what it is, but it fills the scene with a kind of feeling.

I can’t leave the film subject without mentioning Three Billboards Outside Ebbing, Missouri. It’s a beautiful drama and I felt very moved by the characters and the story line. McDormand plays a mother who doesn’t back down – who couldn’t relate to that?

This super cool New Zealander reminds me of one of my favourites, Julia Stone. . I read somewhere that her music is ‘goth folk’  goth folk! How amazing. On face value, you might think this video is pretty nuts but it’s actually referencing a scene from Apocalypse Now.

I really enjoyed this interview where she is worlds away from this video and speaks softly about how Neil Young and Nick Drake are her influences. She sings beautifully and evocatively in barely any make up and jeans and a t-shirt. She is a unique artist and I so hope I can see her perform one day.

March brings a quieter month for shooting and meetings with just two weddings at either end of the month and a couple of Engagement shoots. There’s a lot going on at home this month for some of the special people in my life. My mum is a saviour as I couldn’t work in this industry without her so I’m going to cook for her in our new home for Mothers Day. I’ve planned a surprise bedroom makeover for Elliot for when he returns from his Cubs weekend and then I’ve planned a weekend away with Billy towards the end of March. We barely get a weekend together in a year with work commitments so I’m really looking forward to that. I’m also excited to begin a 28 Day Reset with Daniela Exley of Beets Pulse and Thyme because frankly – I need to put the chocolate down and her programme looks awesome! Daniela is local too so it’s always a pleasure to support a local lady.

Ultimately, and best of all for everyone March welcomes Spring and a new kind of light and warmth. I wish you the best few weeks ahead and I’ll meet you back here on the 28th.